The Good and Bad of Rent “Not So Live” 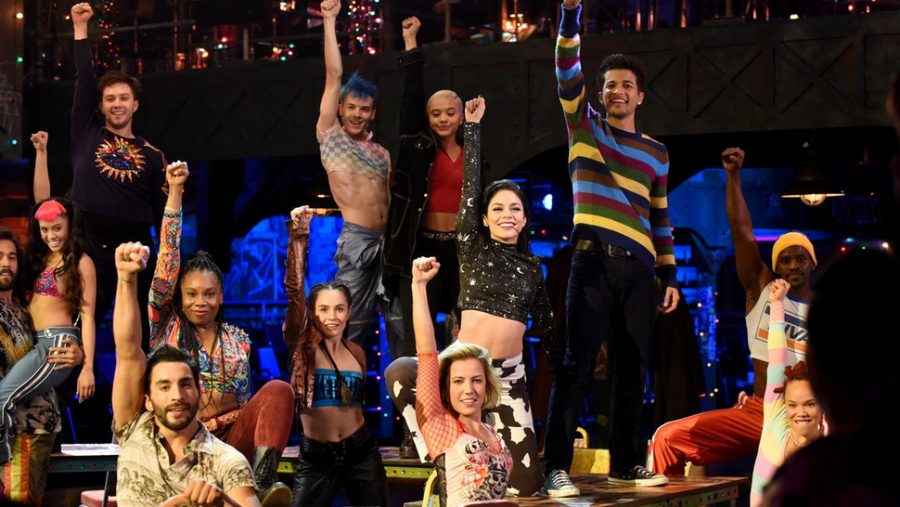 Thousands of Rent-Heads gathered around the TV to celebrate La Vie Boheme.

Rent, a musical based on Puccini’s opera La Bohème, is about a group of starving artists during the HIV/AIDS epidemic of the 1990s. Mark (Jordan Fisher), an aspiring filmmaker, and Roger (Brennin Hunt), an HIV-positive musician, scramble for money to pay rent to their landlord and former roommate, Benny (Mario IV). Meanwhile, their friend Tom Collins (Brandon Victor Dixon), a professor, has fallen for Angel (James Leyva), who is slowly dying of AIDS.

There was one major issue. Because Brenin Hunt injured himself at the last minute, the special wasn’t entirely live. Everything up until the finale was previously recorded footage of the dress rehearsal. The cast wasn’t aware, and they were saving their voices for the actual performance. That really wasn’t the best plan. Why couldn’t they just have had Adam Pascal fill in as Roger, since he was there and portrayed the character in the original cast?

The irony is that in Act 2, they keep “Contact” which is a dance number representation of the couples’ sex lives, and of how quickly HIV/AIDS is spread through sexual intercourse. Although not explicitly stated, it is assumed that this is how Angel contracted HIV/AIDS.

I was really not a fan of the adjustments made to the blocking of “Seasons of Love.” Traditionally, the actors perform the song standing in a straight line at the edge of the stage. It’s supposed to be this lovely tribute to Jonathan Larson who unfortunately died January 25, 1996 which just so happened to be the day of the first preview. In Rent Live, “Seasons of Love” begins with everyone seated at Life Support. This change was not only unexpected, but I felt it was quite disrespectful to the memory of Larson.

What I liked about Rent Live was that unlike some of the other live TV musicals, this was actually filmed like a theatrical performance on a stage, rather than the studio trying to shoot it like a movie. It started off with a backdrop of apartment walls during “Tune Up #1,” then when the title song “Rent” started, the backdrop came down and the whole warehouse-turned-theatre was revealed. I liked how the space was utilized and how each and every area was like a different part of the stage.

Brandon Victor Dixon’s rendition of “I’ll Cover You (Reprise)” was absolutely brilliant. It was, in my opinion, the best part of the show. Dixon blew the roof off with his performance. It honestly made me emotional.

The live TV musicals are really getting better as far as production goes, and that was definitely showcased in Rent Live.